Svyatoslav Mazur: Global parasites will be destroyed in the near future 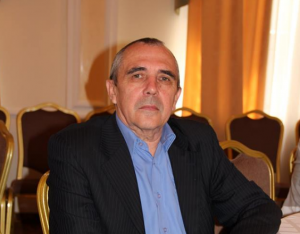 We have come to the main point in world history - the transition of the Earth under the direct leadership of God the Father Almighty.

I am often blamed for the fact, that I have repeatedly in my articles talked about victory, but there is still and there is no victory. And no changes are also visible. Well, it is not visible, because humanity basically does not understand, what exactly is happening on our planet and what forces dominate in its life.

Thus, when I talk about global or cosmological processes, I usually take a single person, who was created in the image and likeness of God, as a model. So it is easier for a person to understand the meaning, because he himself is such a visual model.

So, we proceed to the consideration of the main event. In my last articles, I talked about the fact that the evil forces introduced our planet into a coma, from which I had to bring it out and return it to a single system of cosmic interactions.

You ask, why did these diabolical forces bring her into a coma? This is the main point of what is happening.

On the Internet, and in other information dissemination tools, materials appear more and more often that on Earth, besides us, modern humanity, there were already other civilizations, that were destroyed in various kinds of cataclysms, deluge, nuclear war, covered with ashes or clay and so on. And our scientists drive into our heads the idea that our planet is not immortal, and humanity is an intermediate link between an animal and a biorobot, and that the planet will inevitably die after some decades, because resources have been exhausted, and the prospect of recovery is absent due to the overpopulation of our planet. And on the face of a dead end, from which there is no escape.

Instead of solving these problems, mankind throws all its resources into the arms race, the struggle for the rights of sexual minorities, freedom and democracy, which, as we know, do not change the ecology of the planet. So what's the deal?

Explain popular. Imagine that in your organism, in your internal microcosm, parasites have settled, that cannot create anything. Their only function is to consume the resources of your body, and they will consume them until they destroy you. And imagine that these parasites have intelligence. They know, that they will destroy you, and after that they will spread to the next  victim, etc. They care little about your life. They care only about one thing - the amount of resources. For this is only their possibility of existence. They don't live differently. If they are released into a different environment, into fire or into the light of God, they will immediately die. In this position, you have only two choices: either destroy these parasites, or they will destroy you. This, provided that you know that such creatures are operating in your body.

And if you do not know this, and you are told by competent scientists that you need to drink vitamins, breathe fresh air, not deny yourself anything, go into politics, fight for human rights, etc., that no pests exist, for how long will you live? These parasites multiply rapidly and do not stop for a second to consume your energy.

Consider another situation. You have learned that parasites are operating in your body and if you do not destroy them, it means they will eat you. You start to fight them, but, as I said, they have intelligence. Being inside your body, they find important organs of life support and disconnect you from the outside world. You fall into a coma.

I ask the question: who will prevent these parasites from eating you? No one. That's exactly the same situation exists on our planet. Invisible to the human eye creatures carry out a plan to destroy our planet. They put her into a coma so that external forces could not help her and for a long time carried out her destruction. And if this planet was itself, as a single person, no one would pay any attention to it. Just think how many people on Earth are victims of diseases and parasites? Millions.

But the fact of the matter is that the Earth performs a very important function at the cosmological level. She is the heart of the universe. Through it, the learning and development of the Gods takes place, that is, it realizes the main function of the development of our galaxy. Thus, when danger arises over it, the Divine forces come to the rescue, because they understand , that the death of the planet will mean the death of the entire cosmic system of the manifested Divine world.

That is why we see that these cosmic forces have already freed our planet from parasites more than once, burned it with fire, covered it with ashes, flooded it with water.

But what should the parasites that have high intelligence do in this case? They introduced the planet into a coma, disconnected it from communication channels with the outside world and, thus, were able to destroy the planet itself, along with humanity, and the entire manifested Divine world.

It was in such an environment that the Great Almighty sent me, the Father Almighty, to my own inner world, precisely so that I could destroy the leadership of these devilish forces with my knowledge and skills and connect the broken communications of our planet with a single divine organism. That is, he restored the heart of the manifested Divine world and, of course, according to the plan of God, fulfilled His will.

I connected all the communications, which all the mankind constantly informed about in my materials and, finally, brought our planet out of coma. Now all these devilish forces were left without leadership. A team of space forces arrived on Earth to conduct another sweep. And rest assured, all the parasite countries, heads of corporations, religious movements, various royal families, and so on, that is, all parasites and their henchmen will be guaranteed to be destroyed in the near future. And other options simply do not exist.

Svyatoslav Mazur, Grand Master of the Sacred Space Order of the Knights of the Round Table.